The Philharmonic Festival showcasing Yefim Bronfman playing Beethoven continued with Piano Concerto #5 and the Triple Concerto with Principal Cellist Carter Brey and Concertmaster Glenn Dicterow. Not only was this the final subscription concert of the year, but the last concert appearance of Glenn Dicterow and other retiring Philharmonic musicians including principal trumpet, Philip Smith.

Unfortunately, I was not able to get to any of the previous three shows this year in the Broadway by the Year series. In the past, the focus of each show has been on the music of a single year. This year, however, Scott Siegel (the shows host) promised 100 years of Broadway with 100 different songs and performers. This final show took listeners from the early 90s to the current day. While I enjoyed the show overall, I thought the music selection was a little on the loud, belty side. Also, many of the pairings of performer and song were not the best. Quite a few of the songs pushed the limited of the performers and it showed.

Siegel indicated that the 2015 series will follow the same format – 100 years of Broadway with 100 songs and performers. I hope to be able to see the entire series next year! 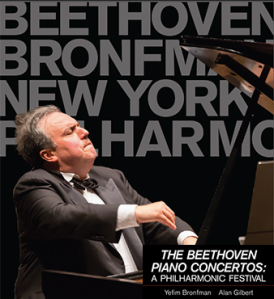 The Philharmonic Festival showcasing Yefim Bronfman playing Beethoven continued with Piano Concerto #2 and Piano Concerto #3. In addition we heard the premier of Sean Shepherd’s Songs. You can read the review of the Beethoven and a bit about the Sherpherd piece at the New York Times: Beethoven, Bronfman and Soaring Sparks. The third and final week of the Festival will present Piano Concerto #5 and the Triple Concerto with Concertmaster Glenn Dicterow and Principal Cellist Carter Brey.

I traveled to Glenside, PA on this Friday to see the Tesla Quartet. This is a fine quartet under the capable leadership of violinist Ross Snyder. I enjoyed the program for the evening, particularly watching the cellist, Serafim Smigelskiy. I am looking forward to any future performances in the area.