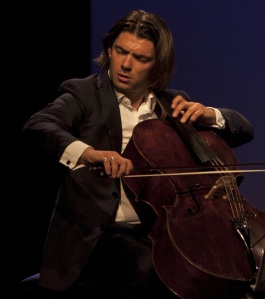 Andrey Boreyko was back for a second straight week at the Philharmonic, this time with an all-Russian program featuring the Shostakovitch Cello Concerto No.1 with Gautier Capucon.

The pre-concert talk was notable for how the presenter, Fred Plotkin, synthesized the works and highlighted common threads (other than all being Russian). I also enjoyed my seat in Row D of the orchestra. While I wouldn’t want to always sit so close as the sound is not balanced,  it was enjoyable to closely watch the musicians and conductor. Another satisfying evening at the NY Philharmonic!

Growing up as a trumpet player, being in the jazz band – or stage band as it was often called – was a joy. I often enjoyed playing in a smaller group (as compared to the larger bands and orchestras) and learn about a different style of music. This evening, filled with music by the Jazz at Lincoln Center Orchestra, brought back some of those memories. The audience heard two commissions by two members of the Orchestra – Ted Nash and Victor Goines.

Can you believe I have never seen the musical Pippin before this evening? The production currently on Broadway is quite spectacular with lots of circus-like acrobatics and magic. Having done the Freddy Awards for 10 years, and seen that this shows has been done by high schools, I wondered what the quality was. There are also some scenes that I imagine would be a little risque for your conservative Lehigh Valley high school. No?

Russian conductor Andrey Boreyko returned to the Philharmonic – 2 weeks this year – to conduct a pair of works based on Hans Christian Andersen tales and Mozart’s Bassoon Concerto with Principal Bassoon Judith LeClair.

There is an interesting CNN interview online with Judith Leclair. Interesting story of her bassoon. 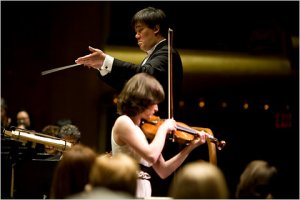 It’s hard to believe it’s been 3 weeks since I’ve been to New York and the Philharmonic. This week’s concert was a eclectic mix of Beethoven, Shostakovich and Gershwin. Russian violinist Lisa Batiashvili was featured in the Shostakovich.

Alan Gilbert was back as conductor. The New York Times review is located here.