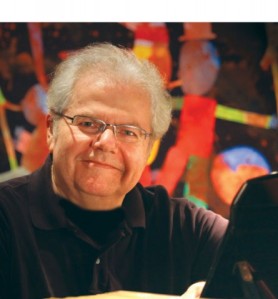 This was my final New York Philharmonic concert of the 2012-13 season! (However, I do plan to see two summer concerts in a few weeks.) The program consisted of three seemingly dissimilar works – Haydn’s Piano Concerto in D Major (featuring Emanuel Ax), Christoper Rouse’s Symphony No. 3 and an arrangement of music from Wagner’s The Ring assembled and orchestrated by Music Director Alan Gilbert.

I attended the pre-concert talk, this time devoted entirely to Christopher Rouse who discussed his work on the program. Rouse’s work is big (lots of loud playing from brass and winds) but accessible. The audience gave him a rousing ovation that lasted for several minutes. While I’ve never been a big fan of Wagner, the audience also appreciated the nearly-hour-long rendition of music from The Ring.

This was an Actor’s Fund performance of the hit musical from 2011. While the cast has pretty much changed, the performances are as hilarious as the originals. While the musical specifically takes aim at Mormonism, there is a broader theme about religion, faith and how “man” has mucked it up through embellishments to suit the situation at the time. 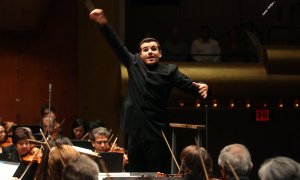 The New York Times printed a favorable review of Mr. Bringuier’s direction and the Philharmonic’s performance.

The revival of this lesser-performed Rodger’s and Hammerstein classic was very satisfying. I particularly enjoyed the score and the various effects and staging. The effects (such as the transformation of the stepmother from dusty to beautiful and Cinderella’s transformation to a white ball gown) were not gratuitous in anyway. The show wasn’t trying to be anything more than what it is – a pleasant afternoon at the theatre. Cinderella was nominated for Best Revival this season, but lost out to Pippin, another show I hope to see soon!

In addition to classic Broadway, including songs by Rodgers and Hammerstein, Cole Porter and Learner and Lowe, Mr. Szot sang several songs from his Brazilian homeland accompanied by jazz ensemble.

I love this time of year – warmer weather, longer days of light. The only downside is that the New York Philharmonic’s season is coming to an end. Another satisfying concert with some very interesting, unusual programming, thanks to Music Director, Alan Gilbert.

The centerpiece of the evening was Marsalis’ Swing Symphony (Symphony No. 3), featuring the Jazz at Lincoln Center Orchestra with Wynton Marsalis and the New York Philharmonic, conducted by Gilbert. As a prelude to this work, we heard a first half of jazz influenced works – Stravinsky’s Ragtime for 11 Instruments and Shostakovich’s Tahiti Trot (Tea for Two). These works were directed by Assistant Conductor, Case Scaglione. The opening half concluded with Copland’s Clarinet Concerto and Mark Nuccio on clarinet.