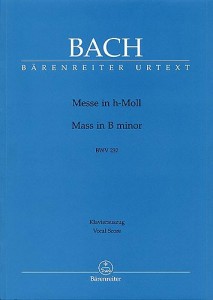 I remember when I was in college (probably around 1984 or 1985) sitting in the “listening room” – a vault-like room in the library with double-thick walls – taking in Bach’s B minor Mass for the first time. One of the reasons for the interest was that I was a trumpet player and had an affinity for baroque music.

Having attended numerous concerts this season, under various conductors, it is interesting how each conductor gets a slightly different sound out of the orchestra. You can tell the subtle differences between the conductors with whom the orchestra feels confident with whom they are tentative. Gilbert is an expressive conductor that spent his time equally focusing on chorus and orchestra and provides room for the musicians to sing and play confidently and musically. There were many nice moments of musical line throughout the work. New ways of hearing the Mass unlike any recording.

Yet another satisfying evening at the Philharmonic.