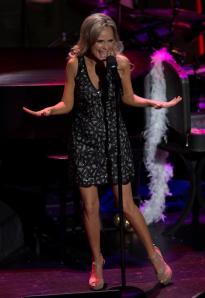 Titled Dames of Broadway…All of ‘Em!!!, I found this show to be a disappointment. With a big name and a big personality, I expected more. I found the program fairly dull with lapses in memory on words. And what was with drinking a big Coke on stage? While I found her accompanist/musical director to be outstanding, providing some very sensitive playing, the bass player and drummer were underutilized. The most underutilized of the evening, however, were the four back-up singers on Moonshine Lullaby. Really? These guys came out for that? And just that?

I don’t understand what people see in Kristin Chenowith. A mediocre show that did not live up to it’s name or hype.