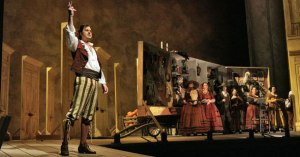 My December subscription visit to the Metropolitan Opera was to see Rossini’s The Barber of Seville. This wasn’t your typical opera production since it was shortened in length and translated into English. However, the set, costumes and staging were used from the 2006 Met production directed by Bartlett Sher.

While I described the translated/shortened production at intermission as “opera for the age of distraction,” it was still very enjoyable. I learned that it is possible to translate an opera into English and remain true to it’s character and, in the case of The Barber of Seville, humor. The English translation was effectively done by J. D. McClatchy and provided for a most enjoyable afternoon of opera.